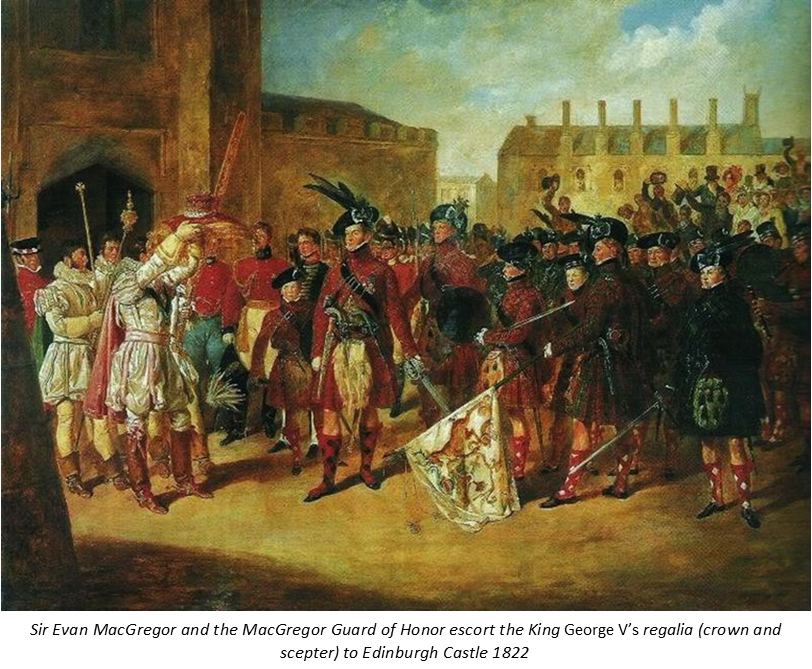 The King’s Jaunt, as it was christened in August of 1822 also had another name – the “21 Daft Days”, during which time over 10,000 spectators, many in kilts, turned out on the Royal Mile for the first visit of a British king to Scotland in 140 years. George IV attended receptions, dinners, award ceremonies and threw a few banquets of his own. By all accounts Edinburgh was delirious!

Behind the scenes, the whole affair was planned, and largely paid for, by two men - Sir Walter Scott and Sir John MacGregor-Murray, with further military support mustered by General David Stewart of Garth.

A few years before, in 1817, Scott had written his much- acclaimed novel Rob Roy, which quickly became a best-seller throughout Europe, and as a result, Sir Walter went on a spending spree, building himself a splendid home in Scott country. In fact, upon entering Abbotsford, replete with weapons collections, paintings, Scott’s writing desk and relics of bygone eras, a guide was heard to say, “Welcome to the house that Rob Roy built!” Hence the connection we will celebrate in 2022. The novel and the celebration had the effect of propelling Clan Gregor from out of the shadows of lawlessness (Proscription had been lifted in 1774), and into the realm of martial fame and glory – all in a mere 50 years! With our name restored, some 822 gentlemen of the clan stepped forward to reclaim the name, although it is estimated that half of those who took other aliases did not take the name back.

Fueled by the fervor of the day, the first clan Societies were established, with Clan Gregor third among all clans, in 1822. 2022 will mark the 200th anniversary of our founding.

There is a story, likely true, that Scott went to see King George in London, and by telling him something like ”You descend from ancient Scottish kings!” (quite a stretch!), he got George to put on a kilt! George loved the whole thing! So why were the MacGregors the Guard of Honor, guarding the King’s crown and jewels? John MacGregor-Murray’s influence derived from the colonial era in India, where MacGregor-Murray had served with the Bengal Army (a private enterprise supported by the British government – a system that worked out quite profitably for most parties involved, unless you were a Caliph!)

His title was Comptroller of the Bengal Army, which put him in charge of the money! If you haven’t read about the escapades which accompanied colonizing “the jewel in the Empire’s crown”, google Lord Clive sometime.

The rest I’ll leave to your imagination for the moment. 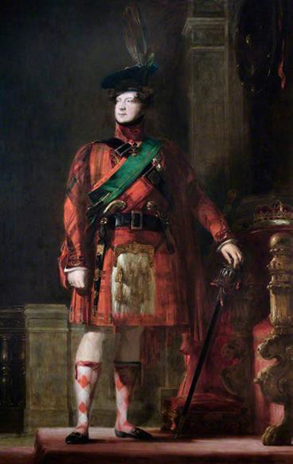 .John’s son Evan MacGregor also served in India, following his father and commanding a MacGregor regiment at the beginning of the 19th century.  He looks quite good in the painting on page 14 (which hangs in the British Museum), but in fact he was badly wounded a few years earlier in taking the surrender (supposed) of Fort Talneir, an Indian stronghold in the Punjab. Cut fourteen times in the face and arms before his troops could reach him, it marked his retirement into more gentrified pursuits. His co>usin Peter, also a ranking member of the Glencarnoch family, was killed defending him.

The MacGregors did not hesitate to hang the Caliph over the outside wall and destroy the entire garrison, taking no prisoners. On his return to Scotland, Sir Evan was made Governor of the Windward Isles (Caribbean), and therein lies another story! Still, it was Evan who led 150 MacGregors, resplendent as the Guard of Honor in their new red kilts, who bore the king’s regalia (crown and scepter) up to Edinburgh castle, where they are on display today.

Keith MacGregor (This email address is being protected from spambots. You need JavaScript enabled to view it.)