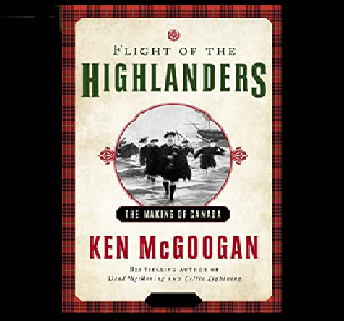 Flight of the Highlanders: The Making of Canada by author Ken McGoogan.

This is a good book for all Canadians of Scottish decent to read. What sets this book apart from so many well documented accounts is that it goes beyond the clearances, crosses the ocean, and follows the struggles of these wretched souls as they overcome enormous challenges carving out a life and a country here in Canada.

In many instances the author brings the story of their descendants right into the present day. A word of caution though: it is deeply disturbing to fully grasp the dire circumstances under which our ancestors and many others came to Canada. I felt frustration and outright anger at the treatment of these poor people.

The book is divided into three tracks. The first provides a good overview of what was going on in Scotland that led up to the Clearances. The debacle of the failed ’45 with Bonnie Prince Charlie and its ramifications is well developed and sets the stage for the destruction of the clan system and the complete corruption of a number of chiefs as they abdicated their duties of protection and support in favour of material gain. This set the stage for the Clearances. It was at this point in the book that my ire began to rise.

The second track deals directly with the forced evictions of poor crofters who had lived for hundreds, if not thousands, of years subsisting on these lands under the collective protection of clan. Heart rending after heart rending account, well supported with direct quotes, tell the stories of widespread brutality at the hands of absentee landlords wishing to improve the financial returns on their lands by forcefully removing people to make room for sheep. They were loaded onto coffins ships with nothing more than the shirt on their backs and then off-loaded at unknown destinations without resources or support. There is one particularly brutal account of the forced eviction of a Gregor as witnessed by Donald Ross.

“Margaret McGregor, aged forty-seven years, was the wife of William Ross, tenant, Greenyard. This poor woman met with savage treatment at the hands of the police. She wanted to reason with the sheriff on the impropriety of is conduct, because Mr. Munro, the tacksman, had denied all knowledge of the warrants of his removal. The answer she got was a blow on the shoulder, and then another on the left ear with a baton. That blow was so violent that it cut up the gristle of the ear, breaking the skull and shattering the temporal and sphenoid bones. Result: concussion and compression of the brain. The blow was so forceful that it knocked the poor woman to the ground and caused blood to flow copiously from both ears.

Even after she was on the ground, the police struck her with their batons, and with their feet; and then left her with her head in a pool of blood. Donald Ross could not see the smallest hope of recovery. She was the mother of seven helpless children, and when he saw the poor little things going backwards and forwards, “toddling” around her sick bed, looking with sorrow at her death-like visage, he felt his heart break. The few sentences which the poor woman managed to speak went clearly to show that she had been barbarously treated. Ross’s firm conviction was that she was as cruelly murdered as if a policeman had shot her on the links at Tain.”

At this point my blood, my Highland blood, began to boil. At the outset, the author correctly draws attention to the fact that under the current United Nations definition, these people were not immigrants; they were refugees. In today’s terms, their treatment would indisputably be characterized as ethnic cleansing.

The final track deals with what happened to these poor souls once they landed in the new world. Unfortunately, in all too many cases, more of the same in the form of poor treatment, exploitation and abuse. Shamefully, the history of mankind reveals a pattern of man’s inhumanity to man and the struggle of haves and have nots.

The Highlander refugee has to fight for every break against overwhelming odds. McGoogan does a good job of taking the reader through a number of the divisive and often abusive situations they had to work through to get established here in the new world. The emphasis in this final section is centered on how these resilient folks succeeded in stabilizing their lives enough to begin to live again.

In this final section my mood at last transitioned from outright anger, through pity, and on to hope. Eventually their fortunes start to improve as homes and communities are established and institutions based on democratic principles are upheld. It was here that hope blossomed into pride as one begins to see the formation of Canada and the profound effect the mass of Scottish refugees have had on the shaping of our country and its unique and very Scottish form of government.

I highly recommend this book. While historically accurate and presented in good taste, none the less the subject material is disturbing to consider in human terms.  It is interesting and well written and will directly appeal to Canadians of Scottish decent.