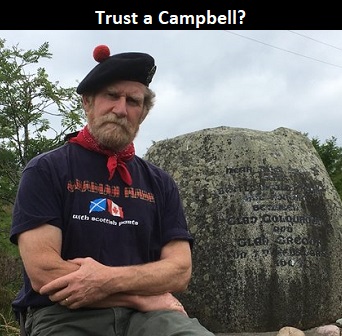 What does “Never Trust a Campbell” mean to Clan Gregor?

The 2018 Gregor Gathering took us on tour of the town of Glencoe where the shameful massacre of MacDonalds took place in 1692. Under pressure of the new King William, Secretary of State Lord Stair ordered an example be made of unruly Highland Clans by forcing a signed oath of allegiance. The Glencoe MacDonalds were late in complying. To make an example a government force, the Earl of Argyll’s Regiment of Foot under the command of Campbells ruthlessly slaughtered their MacDonald hosts as they slept unaware in their beds and homes in the dark of winter. Even today the details of this assault on Highland hospitality and the underhanded dealings that lead to the unprovoked ravaging of Keppoch MacDonalds lives large in Scottish folklore. As we toured Glencoe I noticed a B&B sign on main street offering affordable accommodations. Beneath the sign was a simple statement: Campbells Not Welcome.

While the Glencoe affront to Clan Donald often takes centre stage, we Gregors have also experienced distrust and unrest at the hands of certain Campbells. We have a long and complex history with the Campbells going back to Robert the Bruce. Our stormy relationship is made all the more difficult by the many times we went back and forth between working with and working against each other. We benefited from marriages, shelter and other arrangements. We received protection and later even royal pardons arranged by our Campbell relatives. It was a complex relationship where both party’s actions were based on what they considered to be the most expedient and self-serving objectives of the moment.

The historical record shows that we were willing participants in Campbell manipulations at times. All too often we were outmaneuvered.  Campbells, unlike Gregors, shrewdly understood the value of advancing their agendas by working with the Crown, Privy Council and ruling class. In contrast Clan Gregor stubbornly held onto the old ways and traditional Highland values of trust, fealty and the ancient notion of holding land by the right of the sword.  While there is a list of abusive Gregor interactions with the Campbells spanning many years, which of these incidents is the one that led us to believe that we should distrust Campbells?

To be clear, our trust issues largely centre on a handful of manipulative and self-seeking Campbell lords and not the Clan at large. Our three greatest Campbell enemies all appear around or just before the 1603 battle Glen Fruin – Gray Colin d.1587 and Black Duncan d.1631 are both of the Breadalbane line, and Archibald the Grim, the 7th Earl of Argyle d.1638.  During the 1590’s both sides are trying to manipulate the MacGregor’s against each other, while at the same time Black Duncan is discovered slipping arsenic into cousin Archibald’s food. It appears that Archibald is more behind the betrayal of our Chief, Alasdair Roy MacGregor in 1604 than the Breadalbanes, although Black Duncan, and later his son Robert, pick up the pursuit with renewed vigor in 1611. They later try to buy us out of Glenstrae in 1624. All very complicated but a matter of record.

Years later, in a twist of irony, Robert Campbell goes bankrupt losing much of the money his father stole from others including forfeited Gregor lands.  On the other hand, fate has it that Robert is Rob Roy’s uncle through his mother Mary Campbell and we see a Campbell helping Clan Gregor. When Rob comes into his own doing business from 1702, his chief enemy becomes James Graham, 1st Duke of Montrose who spends his life trying to get rid of the Glengyle MacGregors.  With the disappearance of Rob’s cattle money in 1712, the Campbells, notably Red John of the Battles (2nd Duke of Argyll), turn out to become his best supporter against Graham, even going before King George in 1723/24 to plead Rob’s case.  Instead of deportation, Red John gets Rob exonerated in 1724, takes the post away from Graham as Keeper of the Great Seal of Scotland and sets Rob up  with the Highland Watch – a legitimate cattle trade  - and likely influences Rob’s ability to own property in Balquihidder where the Campbells are our landlords at that time.

So it really comes down to the where and when details of who and why Gregors might have reason to distrust Campbell leadership. Cruel or kind ironies keep happening over relatively short periods of time in Scotland where fortunes change through marriages, alliances, political events, and even the clever political cunning of a guy like Rob Roy, who masterfully plays 3 dukes to his advantage and lives to a ripe old age.

For me, it’s the story of Alasdair Roy MacGregor of Glenstrae, the Arrow of Glen Lyon and Chief of Clan Gregor, and the evil way in which he was brought to his death after trusting himself to the protection of Archibald Campbell, MacCailein Mor, 7th Earl of Argyll.

This incident takes place in 1603 in the furious aftermath of the Battle of Glenfruin (a long story for another time) where Clan Gregor soundly defeats Clan Colqhoun and subsequently ravages the lands of Luss at the covert urgings of the Campbell’s and specifically Argyll. Retribution was swift and brutal. Masterfully seizing the opportunity, Argyll deftly switched allegiance and used his influence to further weaken and displace the bothersome Clan Gregor by urging King James VI to take action. On April 3rd, 1603 King James gave the order to, “extirpate Clan Gregor and to ruit oot their posterite and name.” An Act of Privy Council immediately proscribed the use of the name Gregor or MacGregor upon pain of death and specifically prohibited anyone who had used those names from owning or carrying weapons of any sort. Scores of Innocent persons were now required to change their names by law. All who had taken place in the slaughter of Glenfruin or gave food or shelter to Glenstrae’s clansmen thereafter were also declared rebels, outlawed and sentenced to death. As Chief, Alasdair was the key fugitive. He successfully hid out in the highlands of his own country and avoided capture for some time. For the MacGregors there was to be no reprieve as the policy of Privy Council turned to one of extermination once and for all. All the while his clansmen suffered horrendous atrocities and hardships. Eventually this became untenable and Alasdair responded to an offer to negotiate from, who else? The Campbells!

"Now the Erll Argyill, perseaffing that he was eschappit, he sendis to him ; desiring him to cum to him, that he mycht confer with him, wilder promeis to let him gang frie gif thay culd nocht agrie. Wpoun the quhilk, the Laird Macgregour come to him ; and at his curning was well ressauit be the Erll ; quha schew him, that he was commandit be the King to bring him in ; bot he had no doubt bot his Majesty wald, at his requeist pardoun his offence ; and he suld with all diligense, send tua Gentill menne to Ingland with him, and suld with all diligense follow him selff. Wpoun the quhilk fair promeissis he was content ; and come with the Erll of Argyll to Edinburgh ; quhair , on the 10 day he was be the Gaird conwoyit to Berwick, within Inglis grund and syne brocht back to Edinburgh. And on the 20 day he was hangit at the Corse, with tenne of his kin and friendis hangit with him to the gritt discredeit of the Erll Argyill, quha wes the doare of the sarnin."

(Extracts from the MS History of Scotland, Anon, Advocates’ Library A. 4. 35)

In general, here’s what happened. Alasdair received a message from his cousin, Sir John Campbell of Ardkinglas, to meet at his home on Loch Fyne. Ardkinglas had been a friend in years past and had recently benefited from resetting some of the booty lifted from the Luss raids. He was also desperate to curry favor with his powerful kinsman Archibald the Grim, Earl of Argyll.  Trusting on the bonds of kin and honour, alone and unsuspecting, Alasdair went to meet with Ardkinglass with the hope of negotiating favorable terms of surrender. Upon arrival he was immediately seized, bound and loaded on a boat with five of Sir John’s men for delivery to Argyll. Glenstrae managed a daring escape by untying himself, jumping overboard and swimming to safety. Ardkinglas’s duplicity was foiled.

Fall turned to winter and the persecution of Gregors continued. Now it was Archibald, MacCailien Mor, who would turn Judas. Under the guise of friendship, and disassociating himself from the betrayal of Ardkinglas, Argyll offered to lobby for Glenstrae’s pardon if he would give himself up on suitable terms. He further offered to provide Alasdair with a safe escort across the border and into England so that he might have an opportunity to seek his own pardon directly from King James. With his back to the wall and recalling another occasion (here’s another story!) when the King had pardoned him, he capitulated and agreed to a secret meeting with Archibald Campbell, Earl of Argyll, member of Privy Council and himself complicit with inside involvement with fomenting the raids on Luss. Surely, Alasdair reckoned, this could be his best chance to end the madness and so they met secretly in December. In a most cunning fashion, to demonstrate trust Campbell let Alasdair go after their meeting.

In early January, Alasdair said goodbye to his clansmen and gave himself up to Argyll who then accompanied him to Edinburgh. Ten days later he was transported by the Edinburgh town guard to the English border at Berwick. Honoring “an hielandman’s promise”, MacCailien Mor’s instructions were to allow Glenstrae to cross into England. He did so and was immediately seized by the town guard and transported right back to Edinburgh to stand trial.  Alasdair was arraigned, tried and convicted of treason in short order.  The Arrow of Glen Lyon, Chief of Clan Gregor was then publicly hung at the Mercat Cross in Edinburgh. In a nod to his position, he was strung up a body’s length higher than the ten of his clansmen who were hung at the same time. As his sentence included being drawn and quartered, his head was sent to Dumbarton where it was stuck upon a spike at the town tollbooth as an example for all to see.

So there you have it. Perhaps some might still consider Glencoe proof enough to refuse Campbells a room for the night or Alasdair’s sad end a reason to distrust. While these events are indeed a matter of historical record, they happened a long time ago.  Today we can clearly see that these incidents were the outcome of the actions of a few despicable individuals and certainly not an entire Clan.

Still, once upon a time the Gregors had ample reasons to distrust Campbell leadership!