Editor’s Note:  The following is a transcript of Keith MacGregor’s presentation to the Scottish North American Community Conference on Sunday December 12 for the discussion about the effect by George IV’s visit to Scotland on Clan relationships.    The accompanying images were provided as slides for the talk.

We don’t have an abundance of time, so I’ll get right to it…

It has always been astounding to me how rapidly the savage struggles of Scotland’s past become romanticized in word and song and yet how long they remain in the popular historic imagination.  The times Sir Walter Scott and Sir John MacGregor Murray lived in were certainly no exception – in fact they reflect an era of accelerated change not often seen, which carries on right down to our meeting here today.  Following the Jacobite defeat at Culloden, no less than William Pitt the Elder suggests a choice be offered to all Jacobite prisoners – keep your kilts and your pipes, don the red coat and fight for the British Empire – or hang. The net result, which clearly appealed to the Scottish martial character, sees Scotland fielding some 50 regiments by the time of Waterloo.

MacGregor Murray served for many years in India as Comptroller for the Bengal Army and upon his return managed to get his son Evan Murray MacGregor an appointment in the Royal Highland Volunteers in 1803.  At that time, both MacGregor Murray and Scott were members of the Highland Society of London, largely for those who had done military service - an organization which in 1782 managed to have the Disarming Act (dating from Culloden) repealed, and in 1784, declared as its object the Restoration of Forfeited Highland Estates.

One has to ask, what was the real nature of their enduring friendship, which would underpin the stunning results of 1822?  We know that both men were romantics who loved the stories of the past, and were passionate about redressing the wrongs done to their kinfolk in earlier times when the Scotts were pursued as reivers on the borders as were the MacGregors in the Highlands. What many readers don’t realize is that John MacGregor Murray, born 1744, was nearly thirty years older than Walter Scott, born 1771.   One has to wonder about Murray’s role  as a possible mentor, sharing his stories and experiences with Scott; about their mutual admiration of Rob Roy,  their love of the Highlands, and even if the publication of Rob Roy itself in 1817 was  cause for their deeper friendship.

Nor was it a secret that both were united in their socio-political aims of raising Scotland and the clans up.   What may not be as well known is that both men were ardent Unionists of a certain kind who wanted Scotland in the vanguard of the union and not as a vassal of England. It is not hard to imagine their excitement when Scott conjured up the vision of a pageant which so clearly and powerfully served that goal – a gala visit to Scotland by the king– the first time a reigning monarch had visited since Charles the 2nd was crowned in Edinburgh in 1651, in defiance of Oliver Cromwell.

The story goes that Sir Walter is said to have wooed George the 4th by telling him he was indeed descended from ancient Scottish kings (a bit of a stretch at best!) and by getting him into a kilt…pink tights and all!  It should be noted the Sir John, along with General David Stewart of Garth, would have been instrumental in bringing in the military elements they knew well, who were vital to a royal exposition.

What is beyond doubt is the MacGregors were given pride of place as the Guard of Honour for the Kings Regalia – the Crown (dating from 1570) and the Scepter - escorting them in the parade from Holyrood up to Edinburgh Castle with a contingent of 70 MacGregors in splashing new red MacGregor kilts financed by Sir John, and likely the envy of other clans attending.

Sadly Sir John MacGregor Murray dies in June, 1822, just two months before the king’s visit.  We have diary entries for him a year earlier when he traveled to Glen Orchy, the MacGregor homeland to see Dalmally kirk where the carved stone monuments of his ancestors lay. But it will be his son, Sir Evan Murray MacGregor, who will lead the MacGregors as chief in the 1822 march 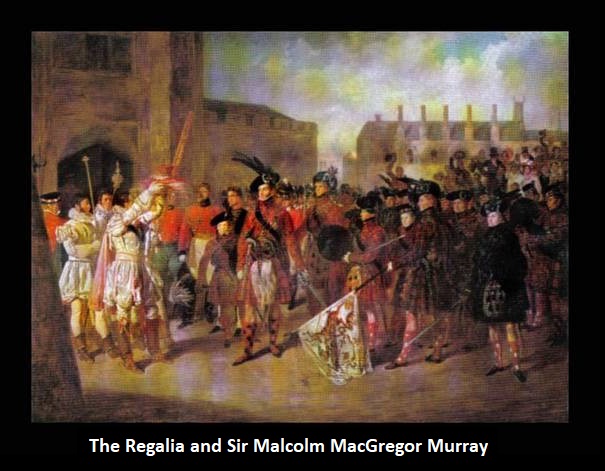 Nor is Sir Evan any less an inspiration than his father.  Cited for his leadership during the harsh Peninsular Campaign during the early Napoleonic wars, Evan is chosen to command a Scottish contingent in the Anglo-Maratha Wars in India (1817-19). In attempting to take the surrender of the killedar (‘commander’) of Fort Talneir, Evan and a small party of men including his cousin Peter are treacherously ambushed inside the fort.  Peter is shot dead and Evan receives 14 wounds including slashes to his face and nearly having his right arm cut off.  When the Scots break through, the killedar is hung over the outer wall with no prisoners taken.

This event will end Evan’s military career, and it is much to his credit that, a mere five years later, he ably leads the MacGregor contingent up the Royal Mile to present the King’s Honours.  He is memorialized in his toast to King George, mentioned by Clark, during the Royal Banquet at Holyrood – “To the Chief of Chiefs – the King!”.

In the aftermath of the “Celtic Revival”, “the King’s Jaunt” or as others called it, “the 21 Daft Days”, we note the establishment of the first Scottish clan societies which now exist around the world.  In 1823, supported by a petition of some 2600 names, the Clan Gregor Society of Scotland becomes the third clan to confirm that status.

In closing, much of the successful transition in elevating the image of Highlanders in the early 19th century is owed to Scott’s pen and his knack for embracing Scottish history.  There can be no denying the impact of the popular historic novel upon the imagination of Europeans and then the world.  That creative vision (and I romanticize a bit here), seems to come at the perfect moment in time allowing Sir Walter Scott to influence the course of both literature and history, which is never easily done.

The Clan Gregor Society of Scotland