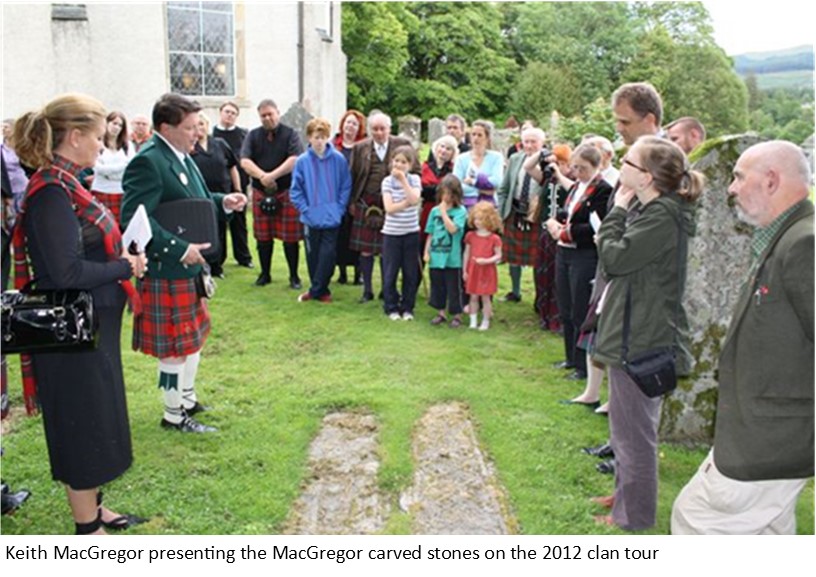 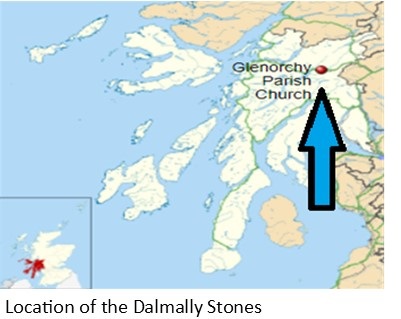 The Dalmally stones and their discovery and preservation have been the most important archaeological research the Society has ever carried out.  For those of you new to the Society and to CGSCC, I’d like to offer these highlights on our monuments over the past twenty years, especially because your chapter has a special connection here.

The inspiration for Richard McGregor, Chairman and Keith MacGregor, North American Representative, began with the Brydale papers, a set of traveler’s notes and sketches (Figure 1) by Thomas Brydale, buried deep in Scotland’s archives. Brydale records a number of medieval carved stones lying in the Dalmally churchyard.

With that, it was our good fortune to possess The Book of the Dean of Lismore, compiled by the clan’s own James MacGregor, Dean of Lismore during the 16th century.  This medieval gem contained a number of early bardic poems from the oral tradition, and the Obituaries (Figure 2): biographical material on MacGregor chiefs, circa 1390-1529.   These sources became the basis for the Dalmally Stones Project, which owes much to contributions from individual donors, the majority of whom are members of SEUS.

Our first object was to identify the in situ locations of these medieval stones in the churchyard, which became something of a treasure hunt.  They had at one time been inside the first church on the site, which was almost definitely built by the MacGregors centuries ago.

Our studies revealed the partial walls of that church, within the present one (Figure 3). 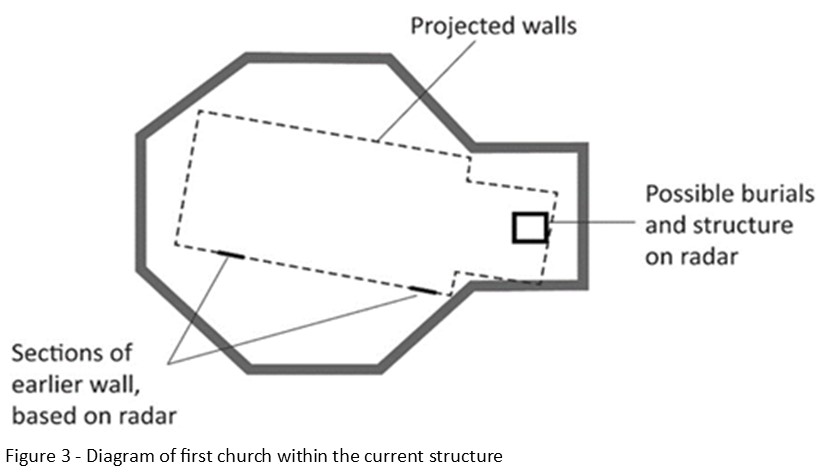 “The graveyard is of national importance because of its collection of Medieval grave slabs and for its potential to provide archaeological information relating to the Medieval and seventeenth-century churches which previously occupied the site.” -   Statement of Importance by the Scottish government

The Reformation in Scotland led by John Knox was particularly cruel in the Highlands, where religion-as-politics provided a convenient excuse for harrying the Highland clans, most of whom remained Catholic.  In 1560, the Campbells announced their Protestant “conversion”, practically overnight, resulting in what the Campbells themselves called “The MacGregor Wars’.

In 1615 Black Duncan Campbell rebuilt the church and ordered the MacGregor stones tossed outside. Pre-Reformation altars, viewed as heretical, were often buried where they stood in order to erase the past. We believe that was done at this location, and we had the Dean’s identification for where our chiefs were buried, on both sides of that altar, over 600 years ago.

We determined to use Ground Penetrating Radar (GPR) and magnetometers to “map” the entire floor of the church and the entranceway, which had been the altar for the period we were searching. 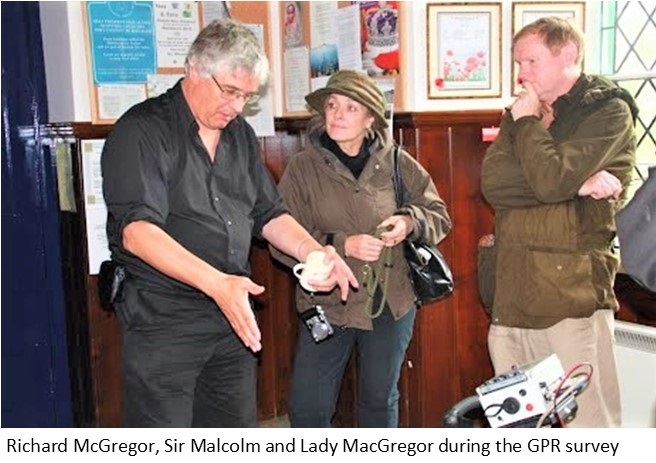 The carved gravestones (SM 3810) at Glenorchy Church are considered to be of the Loch Awe school and different from other regional carvings such as the Iona school (Caldwell et al 2010).  They are similar to Stones at Kilmartin which, it is speculated, were carved from designs found in a Templar manual. They represent a level of artistic expertise/design far above other schools of stone-carving in the Medieval period.

What this GPR reading suggests that there are a number of larger anomalies (Figure 4 - outlined in orange), in the area of first high altar.  These correlated almost perfectly with the descriptions the Dean had recorded. 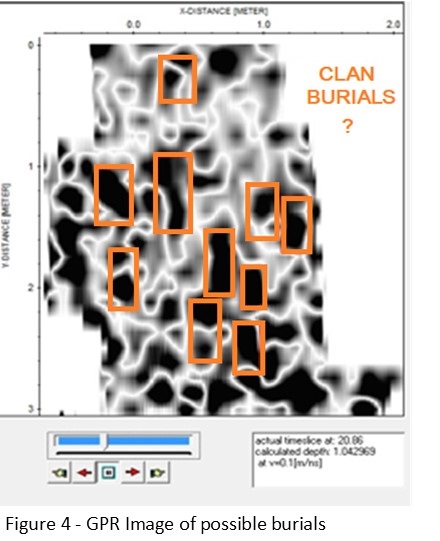 Conservation management studies showed that the stones had been exposed to the elements for some time, and some had been chipped by mowers. Our recommended plan of action for conserving heritage value and through discussions with all interested parties, we opted to move the stones into the sanctuary area of the church.  That process would take years, going from “No” across the board from ministers, church elders, and local historical groups, but we remained determined, as some will recall.

Following extensive presentations and documentation of our findings over many years, we were delighted to hear the decision of the Dalmally Church Elders. Here is the August 2015 Extract from the Kirk Session minutes:

“MacGREGOR RESOLUTION:  A letter received from the Clan MacGregor was read out asking for Kirk Session permission to reposition gravestones presently in the churchyard. The document, agreed to and signed by the clerk, asserts that the Elders are happy to support the proposal subject to subsequent discussions as to the exact location of the stones within the church.”   EUREKA!

“The Dalmally Stones project is alive and well and moving towards completion”.  I wrote that to update our membership in early 2019, little knowing the catastrophe that lay ahead.  We had just entered yet another revision of the required application, for Historic Scotland - one “final” hurdle to actually moving the stones. A significant grant from the government was necessary to achieve the estimated to cost - some 88,000 GBP.  This also meant that all monies the Society had collected from donors would go to the project, a magnificent gesture from our clan at that time. 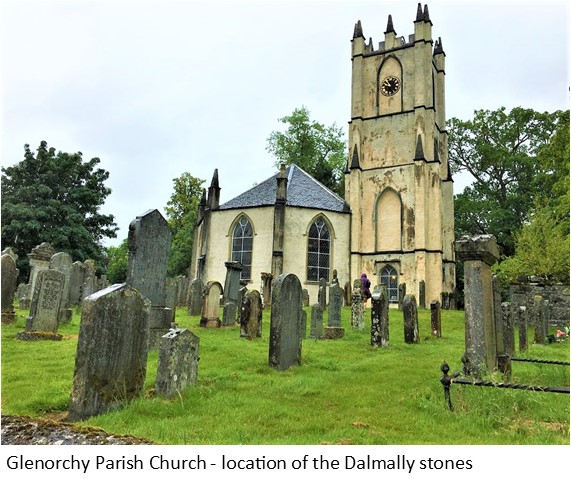 We hoped to have the stones project done by next summer, and while the wheels of Historic Environment Scotland were turning, the incalculable impact of COVID-19 hit the world.  With that, it appeared that much of the Scottish government’s spending had been ”locked down”. We received a terse one sentence statement from them stating “Need to see more community involvement.  Thank you – please re-apply.” That’s doubletalk for “we’re not spending anything right now”!

Though it seems the battle is never over, MacGregor bonds of clanship and a deep sense of heritage binds us.  It does not diminish – certainly not in this clan as history clearly shows. It is now our goal to see the Stones standing inside Dalmally church for our International Gathering in 2022, or 2023 (just in case), for all to see.

One more item here - the Dalmally stones project has now become instrumental in actually saving Dalmally church from being shuttered.  With less and less church attendance in Scotland each year, the Church of Scotland is currently looking at closing a number of rural churches, usually medieval and in need of repair.  It turns out Dalmally was on the short list with two other nearby churches.  By our actions in petitioning to move these registered medieval monuments (the stones) into the church, itself is a landmarked building, and by highlighting their historic importance to Clan Gregor, we have generated a value and purpose for that site which does not exist for the others.  Optimism dictates that our efforts may keep the doors in Dalmally glen open for a long time to come!

*Special thanks goes to our supporters – Ms JoAnn Pippin, Pat Skelton, Inez & Suzanne Boothe and their families, Fred Smith, Bob Terpening and all who have donated.

For further inquiries, please contact Keith MacGregor at This email address is being protected from spambots. You need JavaScript enabled to view it.