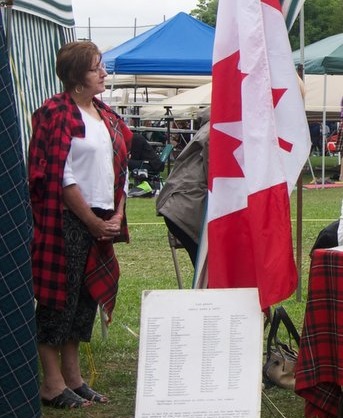 Annie, as she preferred to be called, passed away September 22nd, 2019.She was born in Kent County Nursing home January 4th, 1946, and was raised in Woodstock, Ontario. In 1966 she married James William Stadden, had one daughter, Pam, (former Maple Leaf MacGregor Editor) and worked in a Real Estate career until she retired in 2006. Annie and Jim moved to Rodney, Ontario (MacGregor country) where she was a member of the Elgin County Historical Society and in the last few years returned to live in the Woodstock area.
Annie was active as a Genealogist and historian and had gathered information and photos of her own McGregor lineage since she was young.

She collected any and all books on Clan Gregor and her real passion was helping others to trace their Gregor lines. She was particularly interested in the Glengyle lines of Rob Roy and his cousin Malcolm of Marchfield. Her interest and research brought her to Scotland twice to attend Society international Gatherings. She also enjoyed gardening, cooking, reading, swimming and travelling.

Annie served on the Board of Directors for the Woodstock and Ingersoll Real Estate Board and was a member of Zonta and the Women’s Business Group in Woodstock. She organized and conducted a bus tour in the Sandwich/Windsor area of Ontario, for the “Gathering” of the American Clan Gregor Society in 2011.
Annie has been a member of the Clan Gregor Society for many years. When she learned of the forming of a Canadian Chapter she enthusiastically attended our constitutional meeting of the newly formed Chapter Council. Annie extended her love of helping Gregor’s with their past by generously offering to assist any member with their genealogy at no cost; a service a number of folks gratefully benefited from!

Mercifully Annie is now able to rest from her battle with pancreatic cancer. Annie had a supportive family, an abiding faith and took her challenges in stride. She was a lovely lady and a founding member of the Canadian Chapter. She will be missed but always remembered with affection.