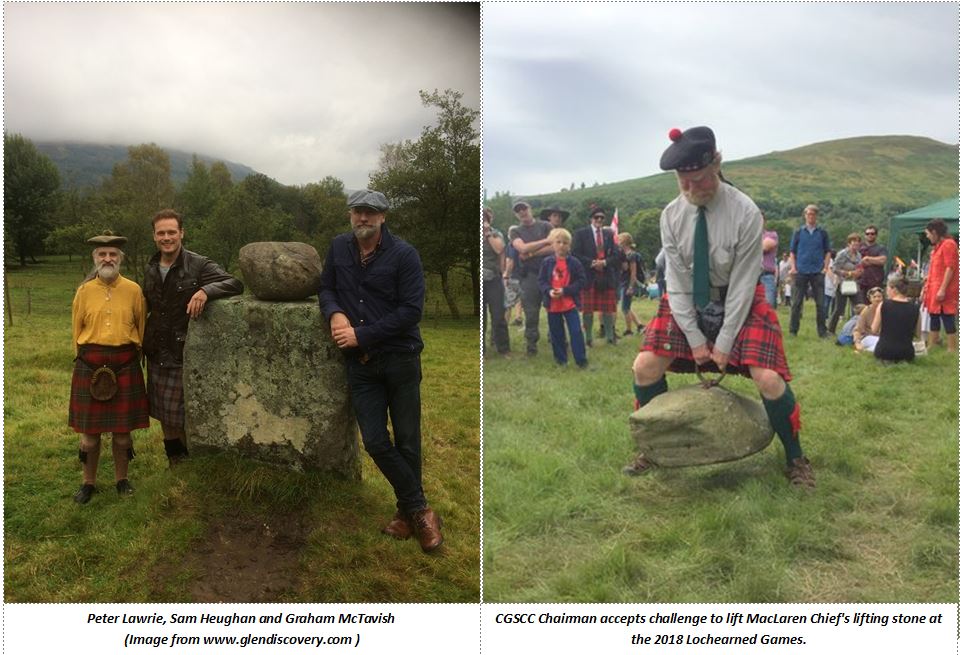 Ed Note: For those of you who are Outlander fans here's one for your interest.  Our Vice Chair Peter Lawrie met with Sam Heughan and a film crew recently at Balquhidder to show him Rob Roy's grave, which turned into a bit more.  Here Peter tells his story.

Yesterday (Sunday 22nd September) I met with Sam Heughan and Graham McTavish at Balquhidder. They had a film crew of 14 with them. I was asked to meet with them at the Pudrac stone (See article by Peter Martin on the Puterach lifting stone in CGS Newsletter 80 - Summer 2014) I explained the standing stone was Neolithic, at least 4000 years old and aligned between Ben Vorlich and the sacred site now occupied by Balquhidder kirk.

The Pudrac or Puidreag probably took its name from the ancient people of the glen, - hence Balquhidder in Gaelic is phuidir, the place or dwelling of the Puidir. Thus people of Balquhidder were known as Pudrach (such as Gregor Roy's brother Alasdair Pudrach.

In more modern times it was used for feats of strength by the young men of the district lifting the stone on the flat top of the monolith until a minister had it removed. A replacement weighing around 100Kg was taken from the river in 2011 and has since been lifted by a number of strongmen from around the world. Sam, himself, succeeded in lifting it. See photo on next page.

Subsequently we met up at Rob Roy's grave. With Donald MacLaren on one side of Sam and me on the other we were invited to present our different views on whether or not Rob Roy is actually buried there.

I explained that Coll and Ranald were tacksmen of the kirkton of Balquhidder. Ranald lived at the inn close to the church until his death in 1786. His mother and two brothers were also in the grave. There is no commemoration of Rob Roy at Glengyle. Dorothy Wordsworth admitted in Note 14 of her 1803 book that her "well educated informant at Glengyle" (That is an incoming capitalist sheep farmer after all the MacGregors had been cleared) was wrong and Rob Roy was actually buried at Balquhidder. Also that Sir Walter Scott reported in the introduction to his novel "Rob Roy" in 1817 that Rob Roy was buried at the Balquhidder kirk.

That was it! No evidence, just an assertion.

We also discussed the infamous MacGregor raid on the MacLarens in 1558. I suggested they were encouraged either by Lord Drummond who purchased the Barony from John Ross of Craigy in 1558, or possibly by Grey Colin of Glenorchy - especially as the surviving MacLarens went to him and gave him their calp or allegiance in exchange for protection. A trick he played on many other kindreds.

We then adjourned up the glen to Monachyle Mhor where soup and sandwiches were on offer. I made a pitch to Sam's producer and business partner Alex Norouzi, of a film about Gregor Roy from 1562, when Grey Colin refused to enfeoff him in Glenstrae to his execution at Kenmore in 1570. Featuring his marriage to Marion Campbell and her song Griogal cridhe lamenting his death and also featuring the evil and manipulative Grey Colin Campbell and a brief appearance by Mary Queen of Scots is a compelling story. He loved it, so I've emailed him some links to information to think about.

It was bucketing down on my way there and on my way home, but fortunately the rain, more or less, stayed off while we were filming.  Sam and Graham reckoned it was very atmospheric.