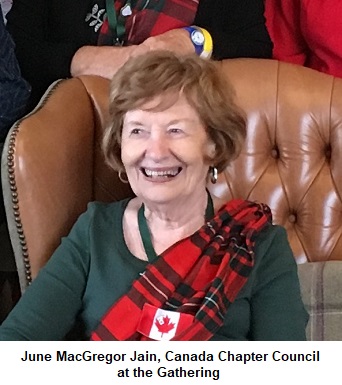 June MacGregor Jain was born north of London, Ontario into a family proud of their Scottish heritage.  She began teaching at the age of nineteen in a one room country school with thirty-four students and eight grades.  She was transferred to a three room school, teaching grades six, seven and eight because there were discipline problems there.  Then the city of London hired her to pilot an A streamed program.  She holds a London Teacher’s College Certificate, a BA and a Masters of Education Degree.

Moving to the Annapolis Valley in 1970 she began teaching at the original Kings County Academy in Kentville, remaining there for thirty-four ears.  Her class trips became famous, especially the one to St. Pierre and Miquelon, off the Newfoundland coast.  Pea soup fog set in and their three day trip became a five day adventure!

Two of several awards are very special to June:  the Nova Scotia Cultural Life Award in Education in 1992 and in 2000 the Halifax Progress Club presented her with the Women of Excellence Award.  She received both the Queen’s Coronation Medal Award and the Diamond Jubilee Medal.

Although retired she still teaches as a volunteer at the Somerset School and she also volunteers at the Valley Regional Hospital in Kentville, Nova Scotia.

She is a member of the Globus Journeys Club, the Monarchist league of Canada, the Valley Scottish Country Dancers Society, and the Clan MacGregor Society of Canada and co-chairs the Grow With Art Program.

June has worked tirelessly with the committee for the local Robert Burns Supper for thirty-five years.  The recipe for ‘haggis’ for two hundred guests is no longer daunting!

Loving all things Scottish, she has recently accepted to fill a vacancy on the Canadian Chapter Council of the clan MacGregor-an entirely new endeavor!

Traveling and reading extensively with husband, Dr. N.K. Jain and enjoying the company of their two children, a son, an emergency physician and a daughter, a high school teacher plus three grandchildren means there isn’t really much spare time.