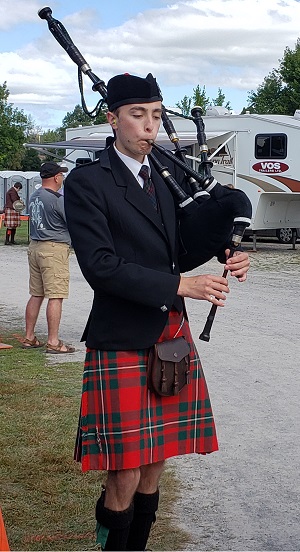 My name is Callum McGregor Gauthier and I play the Great Highland Bagpipes. I am nearly 18 years old. My interest in piping is inspired by being born in the Scottish Clan Gregor. My mother, Dr. Penny McGregor, was born in Saskatchewan to Raymond “Red” McGregor, a descendant of Scottish immigrants to Ontario.

I began learning to play the pipes at the age of 10, with the Smiths Falls Gordon Pipe Band. My lessons began in September and I started playing in parades with the band the following summer. In early 2013, I began taking solo competition lessons from Ross Brown in Kingston and these continue to this date.

During the summer Highland Games season of 2013 I began competing in solo competition in Grade 5, the introductory level. A certified professional piper judges solo piping competitions, ranking the competitors as well as providing constructive criticism. The Pipers’ and Pipe Band Society of Ontario (PPBSO) records the results and determines whether pipers are ready to move up the grades.

Last summer, 2018, was an eventful competitive season for me. In August, I had the privilege of competing in youth competitions at the Perth Highland Games, in Scotland, and due to my successes in Ontario competition, I was Eastern Ontario Champion Supreme (awarded by the PPBSO’s Ottawa Branch) in both Grade 2 Light Music (competition with tunes such as Marches, Jigs, Strathspeys, and Reels) and Intermediate Amateur Piobaireachd (ancient, long piping tunes). These successes also gained me an automatic promotion to Grade 1 and Senior Amateur Piobaireachd: the levels below Professional. I competed in these levels this year.

I have performed in band competition with the highly competitive Arnprior-McNab Pipes and Drums, and Rob Roy Pipe Band (from Kingston), both at the Grade 3 level. Though I did not play with a band this summer, I am hoping to play with the Grade 2 Ottawa Police Service Pipe Band next year.

I have been playing various paid gigs for the general public since 2015. This summer I was asked to serve as the Honorary Piper for the Clan Gregor Society Canada Chapter. I am honored to accept this post and to represent my Clan and Society as best I can at various Highland Games and events here in Ontario Canada.