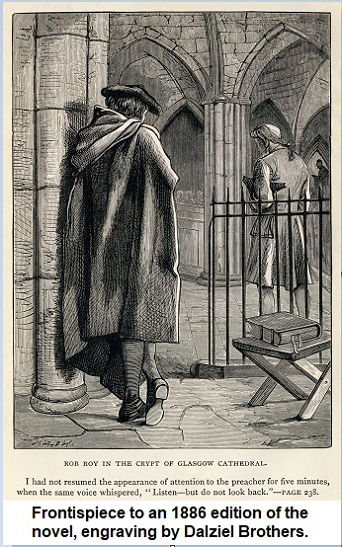 Sir Walter was not the first to publish a book about our famous clansman. That honour belongs to Daniel Defoe who released Highland Rogue in 1723. One of Scott’s most widely celebrated novels, Rob Roy was published in 1817 and was reported to have been largely based on assorted interviews and anecdotes surrounding the life and times of Robert Roy MacGregor.

The story takes place in the north of England and Scotland in the years before, during and after the first Jacobite Rising of 1715. Rob is portrayed as a swashbuckling chieftain of the Clan who gets embroiled in a scheme of protecting the movement of large amounts money for the purpose of supporting the Rising. The story, wildly imaginative in its speculation, includes a wealthy family in Northumberland, merchants in London and Glasgow, a heroine
and a villain. Rob takes them all on, although the reader is fully a third of the way into the story before we meet him.

In the end we are left with a sense that this man, while actively working against the moneyed political powers of the day, was operating from a strong sense of fairness, care for the disadvantaged and a desire to level the field for the average man and woman of Scotland. Scott’s writing style, while wordy (keep your dictionary handy) is bold and his descriptions of scenes and actions taking place are colourful and engaging. In publishing this work Sir Walter
is widely credited for the creation of the historic novel.

It is, however, a novel so do not expect historic accuracy. He names Mary, Rob’s plucky wife, Helen and portrays her as a warlike amazon staunchly holding off the Redcoats in Rob’s absence, to name but one inaccuracy. Still, I picked this out to read as it’s a classic and another perspective on a complex man of legend.

Sir Walter and Clan Gregor enjoyed a symbiotic relationship. Scott became a very wealthy man as Rob Roy became the most wildly popular novel of the day and remained so for years afterward. Due to this interest and popularity, Clan Gregor began to emerge in earnest from some of the stigmas of Proscription and destitution. As a result we gained stature and respect in the eyes of the public.

This book deserves a proper place in a well- rounded Gregor’s library.